iunie 01, 2014
Just after the last echoes of Mahler’s Fifth Symphony faded away, another concert started in the beautiful hall of Romanian Athenaeum. The same conductor, the charismatic Jin Wang, who for 2 evenings at end leaded the „George Enescu“Philharmonic Orchestra returned to the podium in the morning of 24th of May for opening of the International Week of New Music Festival together with „Universitaria” Orchestra of National University of Music Bucharest. The programme contained pieces by Sebastian Androne, Dumitru Capoianu, Doina Rotaru and … Jin Wang.
The concert was dedicated to the young generation: new music, a young orchestra, a young soloist (Octavian Moldovean), a young composer (Sebastian Androne) and, at some point, a young conductor (Andrei Racu).
Sebastian Androne is only 25 years old and he gained many prizes at international competitions. His piece,Erebos, the first in the concert’s programme, indicates a certain attraction of the author for the dark zones of the Universe. The Cinema Variations (1965) of Dumitru Capoianu followed, engaging, with influences of jazz and a prominent rhythmic component.
Concerto No. 1 for flute(s), 13 strings and percussion (1986) of composer Doina Rotaru had as Octavian Moldovean soloist. For this work were used 3 flutes of different sizes (and tuning). The flute is the instrument to which Doina Rotaru dedicated most of her compositions, his timbre being a bond between the ancient Romanian spiritual world and the Far-East one. Aerated, introspective, the Concerto had a good and attentive interpretation by the soloist’s side, and also got the warmth of the audience. 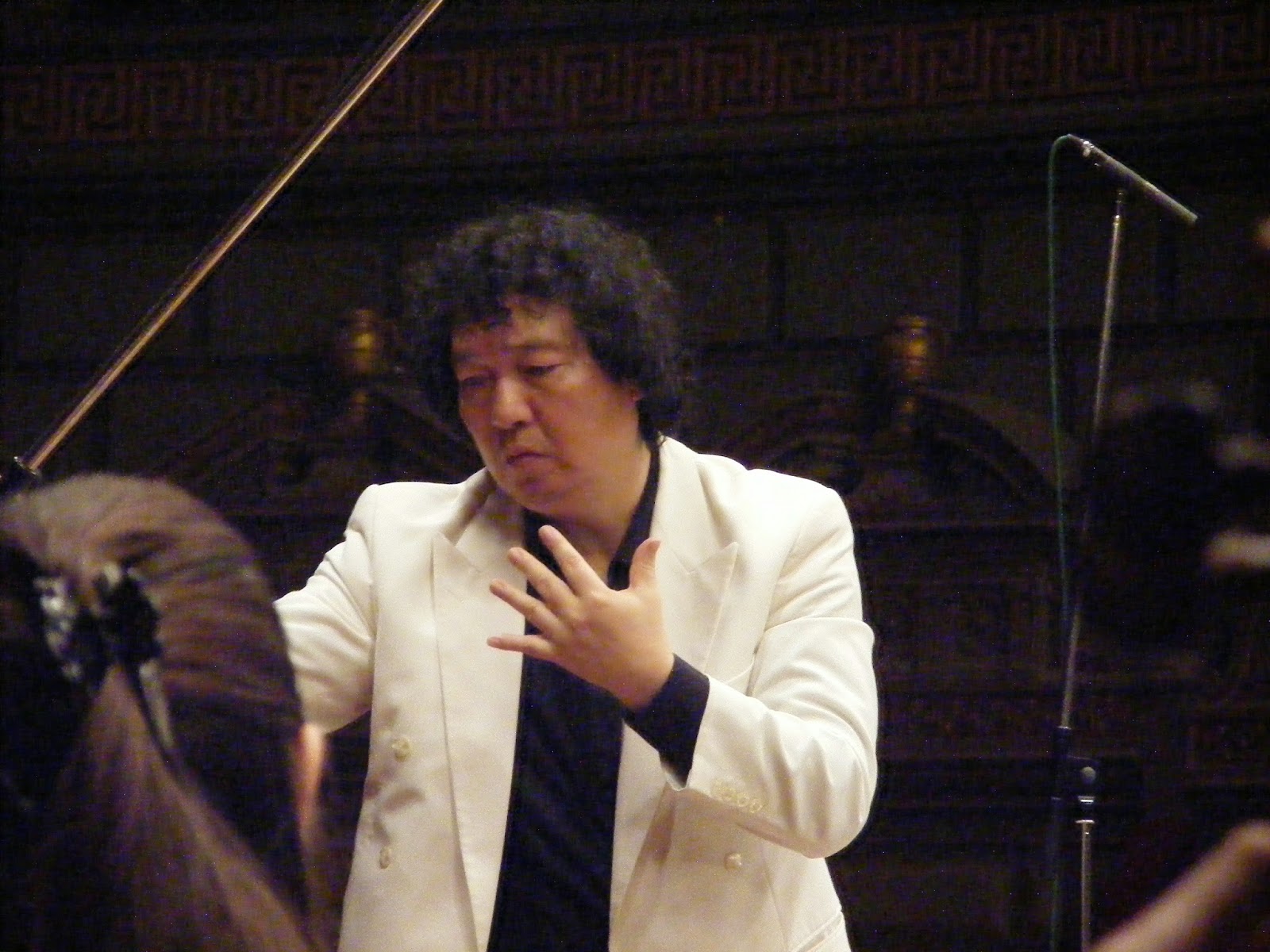 As he proceeded for the 2013 edition of the festival, Jin Wang presented a work of his own in first audition. If last year he came with Tibet Impressions, whose pentatonic melodies were sliced off his own cultural and spiritual space and then vestured in modern harmonies, the percussion section being plentiful exploited. The composer reported himself for this occasion to the European musical tradition, creating a real Concerto grosso. Named Concerto for the Young Orchestra, Wang’s work overflows with energy and humour. A chromatic theme goes through several musical writing styles, from counterpoint to … jazz and rock. Several sound layers are superposed, having different, complicated and even asymmetric rhythms. For this reason, in some moments the second conductor was needed, and this was Andrei Racu, one of Jin Wang’s students. The piece has a rondo structure, with baroque refrain and the modern couplets, the musical flux being interrupted in some moments with telephone ring call like signals, recollecting in its way of thinking of the morphogenetic music put in theory and practice by Aurel Stroe. Wang, though, has no avant-garde intentions. By using different composition techniques, he illustrates the idea of time-travelling, but also the importance of tradition and solid education in the contemporary social chaos.
The organizers of the festival must be congratulated for the idea of giving to this musician the opening concert. Besides the fact that the new music had one of the best possible visions and not only a correct reading, had a valuable interpretation and not a duty discharge, the preparation of the concert became an unique chance for the members of the young orchestra, who are yet students, to work at a real professional level. And this happened under the guiding hand of one of the most precious/appreciated conductors present nowadays in our concert halls.
Conductor, composer and trainer, Jin Wang didn’t allow himself any moment of rest. After the third concert at the Athenaeum, in the evening of the same 24th of May, he conducted, together with his students, the third concert of Jin Wang and friends series organized by Cervantes Institute Bucharest .  Cervantes Chamber Orchestra was leaded by the Maestro, his students Andrei Racu and Gheorghe Iliuţă (the two orchestra teachers from the Bucharest music high schools) and the flute player Ion Bogdan Ştefănescu, who was both soloist and conductor. Ştefănescu was, no doubt, the star and the enchanting of this event. Wang Marathon ended after bringing back on the stage the Chinese musician, this time as a violin player. Loving the challenges, but not giving space to compromise and superficiality, Jin Wang shared with generosity with his audience and his students, more than ever at this and of May, pieces of the treasures of his soul and spirituality.
Cleopatra David

Misconception, misunderstanding and mistrust in education

iulie 14, 2022
During the last 10 years I have observed a huge cultural difference in relation to education and its place in two parts of the world: India and the Western Europe. Whilst in India education is seen as a vehicle for the evolution of the individual and of society, in the western world, the younger generation feels oppressed by it. Romania is a special case, since we are in the Eastern Europe, and hasn’t yet recovered from 45 years of communism, so here we have a blend of everything. First of all, most of us don’t understand the meaning of the term holistically, and are usually only thinking about formal education: traditional school However, education starts in the first years of our lives, se soon as we begin to imitate our parent’s behaviour, language, or reactions. We learn how to talk, how to walk, how to eat and how to clean our bodies. We learn how to relate to other children or to the adults we meet. In life, actually nothing is taken for granted. As individuals, we are a product
Trimiteți un comentariu
Citiți mai multe